Splendid Emily O'Hara is an inspiration! Here I am being inspired by her proximity. 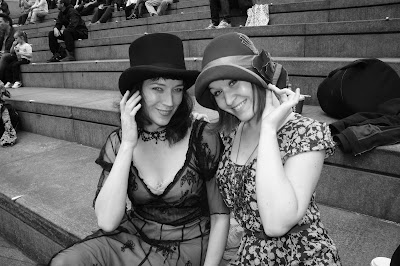 Long before she knew about the fabulous film "The Artist", Emily had wanted to put on a Silent Film night. So she hired the Jamboree in Limehouse (once a sweet factory's worker canteen), pinned up a sheet, chose some films and asked some pianists to play. Oh, and also made the signs, flyers, popcorn-containers and vending boxes and had her lovely family come and help.

Matt Redman,
Lovely Day arranger & guitarist & banjo player & mandolin player & bass player & pianist & ukulele player & you get the idea, and Debee Calveche, whose photos you've seen a lot if you've kept up with this blog, were an astonishingly well-dressed couple. 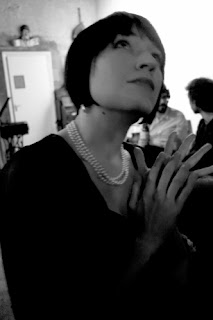 Debee went around with a little box full of cards, on which were written different emotions. She'd ask each person to fish one out, and then express that emotion for her camera. She got quite a lot of different faces from people, and what it really showed was that these silent film actors and actresses were quite talented. It ain't as easy as it looks.
I'm supposed to be 'in love' here. I look more like I'm trying to be Shirley MacLaine, praying.

The Lucky Dog film was accompanied by the wonderfully jaunty and appropriately frantic Ragtime stylings of Julio Schwarz Andrade, a fascinating, multitalented fellow of Brazilian origins who talks like Woody Allen.

This, the first-ever film, gave Emily the name for her venture. The first of many! The Lucky Dog Picturehouse! 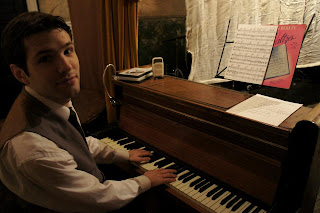 Then I got up and sang some songs with Jon Butterfield playing. He's the cute pianist in the Lovely Parlour Trio, remember? The crowd represented a wide age-range, but they were primarily young. So imagine my surprise when I made a gesture for them to join the refrain of Always and the whole room sang "AL-WAYS!" I love it when that happens. By the way, does anybody like Sir Paul McCartney's version of this song, on his new album? 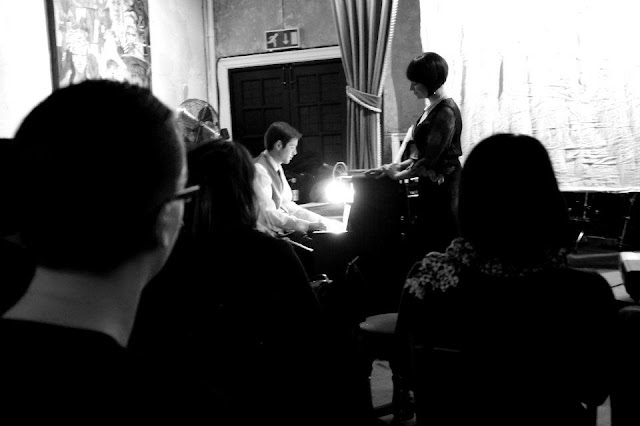 Then it was time for Jon to settle down to accompany the Buster Keaton film, "Cops". I love this film. I love all Buster's films. Those eyes of his! Like the eyes of all great silent movie stars, they're deep, deep pools, unfathomable, expressive. How this man could be so soulful and yet come up with sight-gags that leave you stunned, laughing before you even knew you'd smiled must be one key to his genius. Also, this is the fellow who, as a child, toured vaudeville circuits with his parents as 'the human mop'. In other words, they'd throw him around like one. He was the only man in Hollywood who was not doubled by a stuntman, because even the most ridiculously daring ones couldn't match his particular style. Okay, I confess it. I adore Mr. Keaton.

Well, Jon composed and improvised one hell of a soundtrack for this feature. It was FABULOUS. Nobody, hearing it, would believe that this was his first silent film-accompanying gig. Here's the first part of the score. The fun had by the audience is audible. The piano was hellishly bad. Yet all three of the evening's pianists made it work.

The pictures below give some idea of the atmosphere of the event, but in giving an exposure to reveal the room and the audience, the film looks overexposed. It wasn't. 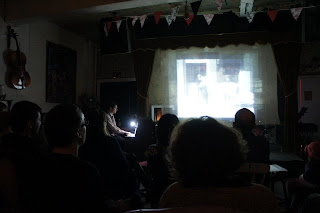 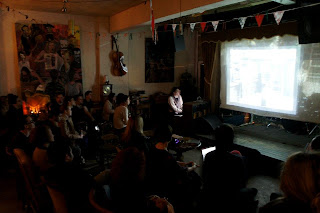 There was a very bizarre Felix the Cat, which Peter Coldham accompanied in fittingly bizarre music. It was quasi-experimental but really really worked. All the more stunning when he told me that he'd only known about the gig the day before. The story was about the terrible conditions in Russia. Considering that this was the twenties, and knowing what we do now, I guess it wasn't so inaccurate.

The night concluded with Charlie Chaplin's "The Pawn Shop." Jon played superbly for this too. But Charlie has no place in my heart really. It's all full of Buster Keaton, and Harold Lloyd (SEXY!!)

Emily has also composed some settings of William Blake for voice and classical guitar, and her current project, other than this one, is composing incidental music for the Vectors of Tropical Disease for Resonance FM, something I hope to blog more fully about in the future. This one will be fascinating. She's just finished the louse, and is working on the bedbug now.