"There was one thing missing from that concert in front of Buckingham Palace," I said to the crowd at the Royal Star and Garter in Richmond on Jubilee Tuesday.

"You!" they all shouted.
I hadn't meant them to say that. I was going to say "...music the Queen's likely to actually enjoy..." Rather presumptuously of me, of course. I've heard, from someone who really ought to know, that her favourite show is Salad Days, for example. It was a little lacking in Julian Slade, that concert.
I know that the Queen's favourite song when she was 16 was "Yours", because Vera Lynn was called to Windsor to sing it for her at her 16th birthday.
I sang that at the RS&G concert.
I was asked, maybe, to sing something from "Singing in the Rain" or "Top Hat", both of which were showing in the West End in 1953, as they are right now. Instead I did something from "Rose Marie" which, though it debuted at the Theatre Royal Drury Lane in 1928, was in Oxford in June 1953, in a production ON ICE, with a company of 70. Hell, I just wanted to sing "When I'm calling you-oo-oo-oo-oo-oo-ooooo"
Let's be honest, here.
This concert meant a lot to me because it marked the first time I've ever done a gig with Peter Jacobs.
Peter's known as a champion of English composers, and has one hell of an impressive repertoire, and also a great discography. I was keen to revive the songs of Cecile Chaminade when I was in my late teens and early 20s, and also to be the first to record an entire CD of them. I had all of Peter's lovely, lovely recordings of her piano music on Hyperion, and I wrote to him. That started a really pleasant correspondence, culminating in my meeting him at his house in 2000. Since then we have been friends. The Chaminade story is another story.
It was a coincidence that Peter and I both give concerts for the residents at the Royal Star and Garter. So Pat Maynard, volunteer and organiser extraordinary, put us together.
In the lobby of the RS&G was the Queen. Well, here's a photo of her. 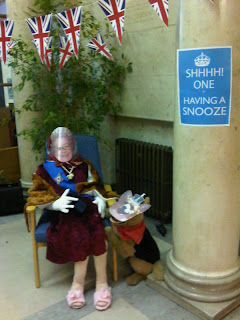 Peter and I did some folk arrangements by E.J. Moeran, Herbert Hughes, Vaughan Williams. We didn't do Chaminade but we did do Liza Lehmann. It was a feast of British music. Then we did when the Red Red Robin comes Bob Bob Bobbin along. And then, Land of Hope and Glory, and God Save the Queen.
Then I got to hear stories of the second world war from those who had been in it. And legends from after the war. I met this man, "Bugs" Bendell, who sat right at front and is a great music-lover. I've never seen him at a concert here before. He had the sweetest things to say. I feel that singing is such a tiny, silly thing compared to what these men and women have done.
Two people were there who don't live at the RS&G but used to visit Nancy Wake and still come along to the concerts. 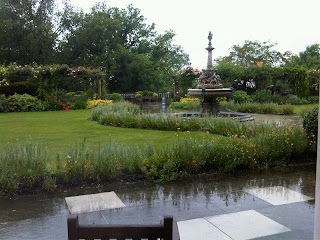 Mildred Schultz worked for the S.O.E. and had some amazing stories, which I only was able to get slight bits of in the time I had. One needs (and wants!!) a whole day to properly hear the lives people like Mildred have led. Her companion Bob Frost had been in the R.A.F., was shot down over Belgium in WWII and was sheltered by a family of farmers, who risked their lives to help him. He managed to cross the Pyrenees eventually, and make his way back to England. See him tell his story HERE. Really, really recommended. It is a fabulous website...Storyvault. That's exactly what it is.

We were going to all go out and have cake on the terrace but it was a bit too damp for that.
Posted by Patricia at 14:09