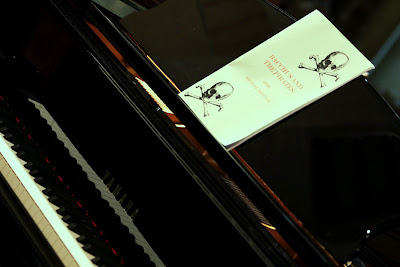 This is a short one to say that the premiere of composer Michael Brough's "Bacchus and the Pirates" was a success!
The second Swaledale Festival for me, and certainly a joyful feast of breathtaking scenery, kind people, a genuine love of unusual and passionate music-making, and all the associations with All Creatures Great And Small in that area. Heck, I grew up looking at those dales. And men with floppy hair and fairisle jumpers thrusting their hands into cows to make them well or bring forth other cows, and tending to little shaggy dogs on rough-hewn tables.

The Festival commissioned Mr. Brough to compose a work for piano, tenor and mezzo, and what did he come up with? Only a 17-minute-long lurid Victorian (I almost wrote 'camp') mini-secular-oratorio! Crazy! Subtitled "Marine Variations for Two Pirates and Piano", The words are by Alfred Noyes (1880-1958). These are the first words I sing:

"Sea-roads plated with pieces of eight that rolled to a heaven by rum made mellow,
Heaved and coloured our barque's black nose where the Lascar sang to a twinkling star,
And the tangled bow-sprit plunged and dipped its point in the west's wild red and yellow,
Till the curved white moon crept out astern like a naked knife from a blue cymar."

Stephen sang heroically and I tried to keep up.
The piano roared, and many in the audience (faces beaming) commented that they'd not heard the piano sound like that during the whole festival.
The concert had to end with duets and we'd run out of ideas. "Oh don't worry, I'll arrange some folk songs," said Stephen. That he did. Those four song arrangements (Soldier, Soldier; The Trees They Grow So High; Golden Slumbers; Oh No John) will have a great future. Zita Syme, my soprano duet partner and also partner of Stephen, was coaxed onto the stage to do Golden Slumbers with Stephen, and everyone was completely enchanted. An unexpected voice is always a good thing in a recital, and when it's as limpid and meltingly gorgous as Zita's, well...it's magic.

The next day we went and sang at a local Retirement Home as part of the festival's Community Outreach. It was in a small town called Bedale and it was a lovely, lovely place. Covered in climbing flowers, and round the side lovely gardens.
Ate lots of pies and didn't exercise nearly enough to make up for it.
Posted by Patricia at 16:10