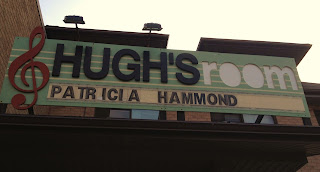 VERY soon after Swaledale I was off to Toronto. It was to be the North American premiere of the Ragtime Parlour Band, only with NONE of the boys here. It was just one gig and so the budget simply wouldn't stretch to five Air Canada tickets plus hotel rooms and all the rest of it.

So I landed, met the four guys hired by Scott, my manager, and shared the songs with them.
It's always nice to share one's love, and my love for ditties like Moonlight Bay, Oh Johnny, Don't Bring Lulu, Long Long Trail and so on is something very strong.
I had a rock guitarist on banjo, a klezmer/bluegrass clarinettist, a classical tuba player on Sousaphone, and a pianist who plays anything, just anything. Though his party piece is certainly all things Muppets. His Kermit is creepily accurate. He also does the Muppet Show song with all voices.
The Sousaphone that Trishul Sharma played was of cream and beige fibreglass. I regret the lack of good pictures of said instrument!
We played at a big tea-party for almost 200 senior citizens at St Andrews, then a few days later played Hugh's Room. I called the show "From the Titanic to the Speakeasy" and it consisted of two sets: one pre-WWI and one post-WWI. I brought the banners along. I think the lads were pleasantly surprised at the level of delighted recognition we had from both audiences, young and old. In fact at St Andrews we had a call-and-answer going for "Moonlight Bay" (me: we were sailing along..." they: "We were sailing along..." me: "On Moonlight bay..." they: "On Moon-Light Bay!") the echo arrangement as seen in the Doris Day film of the same name. Utterly and totally charming.
The Hugh's Room crowd was just as loud in their approval. We were encored and we did "Let Him Go Let Him Tarry" and brought the roof off. The owner of Hugh's Room liked us and said we were welcome back any time.
Pianist Donavon LeNabat then accompanied me to three Nursing Homes the next day and I brought out as many different songs as I could to explore Toronto memories. I sang in an atrium with two real palm trees! In truth, with one exception on the Isle of Jersey, these were the three ritziest nursing homes I've ever sung at
Then next day, I went back to London. I saw fireworks over Montreal at night...they look like little paperweights from above. So funny how these things impress you: I'd always thought of fireworks as being so HIGH up. Well they just barely come off the ground!! Bumpy over the Atlantic, and that meant a long, long time jolting around feeling woozy and worried...Oh I'd travel by freighter and rail exclusively if I could. Queueing at Heathrow I turned on my phone and discovered that poor Martin at St Anne's hadn't found an alto for that day's performance of BWV 21, Ich hatte viel bekummernis. He was desperate. He's one of the most supportive musicians around so I had to help. I dumped the luggage at Hanwell, grumpy and tired - a man complained loudly to his wife about people 'taking up more than one seat' as I sat slumped with 32-kilo suitcase and three bags in the bus and I spun around and growled "This is not the time to mess with me, pal...I am NOT in the mood". At the flat I threw down the bags and snatched up a black dress and went to the Wren church on Gresham Street where I sang through the alto bits while Martin played the rest. Then orchestra, bass, tenor and soprano arrived and we rehearsed. I had strong tea, and dammit if that thing didn't go smoothly! It is not an easy one, that Cantata, and one voice per part means no let-up. But it is one of the most extraordinarily gorgeous creations amongst an output crowded with extraordinary gorgeousness. 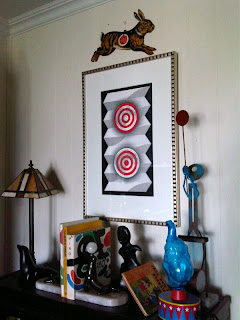 I left the gig and out on the street was an audience member standing in front of the church staring into space. She had a cane and I looked to see if it was white and if she needed assistance. She focused on my face. "You were the alto weren't you? Such beautiful, sinuous lines you sang...beautifully done. That was incredible in there. What an emotional journey that work is! What we've all just been through! Is it really the same day? It feels like three days have elapsed!"
"I know what you mean," I said. I went home and slept 11 hours with no dreams.

In Toronto I stayed with an amazing woman and her two lovely animals, persian cat Lucy and big poodle Larry. Margaret is an art librarian and intensely creative and clever and has the best sense of display I think I've ever seen. A sample of what her house looks like, on the right. The blue plastic elephant gets plugged in and fills with tiny pink lightning. 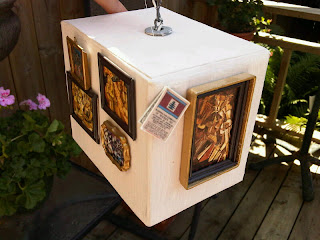 And this is her idea of a Christmas tree ornament. At about four inches high, it's the seminal 1913 "Armory Show". If you, like ignorant I, don't know what that was, here it all is. Notice that her ornament also has a mini catalogue attached by a bit of fishing wire. CLEVER.

She also likes beer and popcorn, two things I'm pretty fond of myself.


I walked past a yard sale in Toronto, and saw, offered for pennies, a crucified Christ in a bottle, a plastic poinsettia (with glitter) in a mini plastic toilet, and a pastel-and-oils portrait of Eminem, framed in gold. But there was a fitness gadget for 25c and I need to get fit. So I bought it.